Sunday saw the televised Birmingham Athletics Grand Prix, featuring many of the world’s top athletes and Rugby and Northampton Athletics Club was there in force!

Before the main events started there was a succession of 4 x 100m age group relays. Teams from Cardiff to Newcastle were invited based on national rankings and R and N had no less than 6 teams represented. The standard was incredibly high but the athletes did themselves proud by producing a succession of personal best times ranking amongst the top clubs in the country. 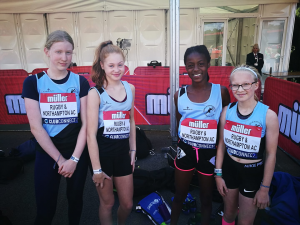 The U13 girls were led off by Olivia Monk who passed to Lilly Lynch, Elise Callard with Ona Ndefo completing the quartet to finish in an excellent 6th position in 54.55 secs. The U17 girls team of Florence Matthews, Fenella Downes, Mica Quinn and Tia Lynch went one better finishing in 5th position in 51.60 secs. 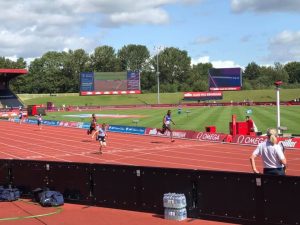 The U13 boys have progressed incredibly well this year and this was borne out by an unbelievable victory – the first ever for R and N at these relays. The race was started by William Gand who passed slickly to Charlie Stephenson and Gabriel Badero. The final leg runner, Luke Doherty took over with a 5 metre advantage and hung on to claim overall victory in an unbelievable time of 51.55 secs and a prize of £250! 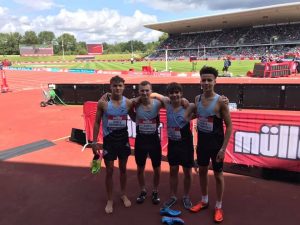 The U17 boys were a late addition to the relays and they showed exemplary baton changing to claim an unexpected bronze medal in an incredibly quick 43.91 secs – a massive personal best for these boys – George Gammage, Will Dean, Ben Lole and Ed Faulds on anchor leg. 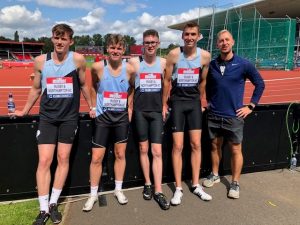 The expectations on the U20 mens team were high, being the top ranked team going in to the event and they did not disappoint! Bradley Whitehead made an outstanding start which was carried on by Sam Whittaker and Will Price. Will passed the baton to GB international Bailey Swift who powered to victory in a rapid 42.79 secs – one of the quickest times in the country this year. They also won the £250 prize !

If you would like more information about Rugby and Northampton Athletics Club, one of the leading athletics clubs in the Midlands, please contact contactus@rugbyandnorthamptonac.org