Two Rugby & Northampton Athletics Club’s members produced scintillating performances at the recent England U20 indoor championships.
Ed Faulds began focussing on athletics last year and is now following in the footsteps of his brother who is an international 400m hurdler. Ed also competed in the 400m hurdles in the summer achieving one of the fastest times as a U17. In the winter he has switched his focus to the 400m flat race, however, and has made huge strides. He started the U20 400m event at the Championships having previously lowered his outdoor best in his first outing of the year. Hopes were high of getting to the final but Ed surpassed all expectations as he won the Championships to claim gold in a super quick 48.74 seconds.
Next to perform came Georgie Forde- Wells. Georgie is a multi-talented sportswoman, playing netball at  national level whilst training for her favoured athletics event, the triple jump. Georgie had also had a successful summer season in claiming 4th position at the English Schools Championships, but moving up to the U20 event would see her competing against seasoned Junior internationals. Georgie produced a truly stunning jump of 12 m 43 – a full 60cm improvement on her personal best, to claim the bronze medal and put herself amongst the top young jumpers in the country. 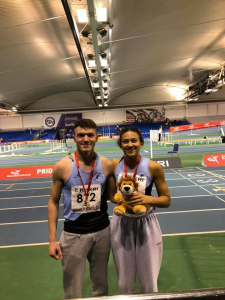