In the 80th running of the Senior Mens race in the Northamptonshire Cross Country Championships Rugby & Northampton AC achieved the best performance by any Northampton team in the history of the event by placing six athletes in the first nine.
For the first time the Championships were hosted by Silson AC in the village of Abthorpe and leading the way for R&N was teenager Josh Lay. The 18 year old who was ranked third U20 in the UK for 1500m in 2018 was making his debut over the Senior 10k distance and covered the course in 31:59 to finish in second place behind the defending Champion Jonathan Goringe of Kettering Town Harriers (31:35).
Lay had the consolation of winning gold in the Junior competition while just two seconds adrift was club mate Dominic Jones to take Senior silver followed by William Gardner in 4th spot on 32:15 for the bronze medal.
Another teenager Haydn Arnall came home next to take U20 silver in 32:49 for 5th place and the youngest member of the squad 17 year old Muss-Ab Hassan recorded 33:05 in 7th position to win the bronze. Completing the scoring six was Junior Adam Searle who was 9th in 33:46.
In the 80 years of the event this was the 26th time that a Northampton club had won the title compared to the all time record of 40 wins by Kettering Town Harriers.
The Championships saw Rugby & Northampton come away with a total of 7 individual gold and 8 team titles.
The U15 Boys took a clean sweep of the medals over 5k with Lewis Panter winning gold in 16:04 followed by Finlay Ward (16:18) and Finbar Myers ( 16:34).
Arthur Tilt won the U13 Boys title with a time of 10:58 over the 3k distance with R&N team mate Ollie Buchan winning silver in 11:19. Closing out the winning team was Nathan Lamb in 5th (11:29).
Defending his title in the U11 Boys race was Ollie Walls with a convincing win over 2k with a time of 9:12. Clinching the bronze was Freddie Caspall in 10:13 and Lyall Lambert helped the squad to win the title in 4th spot ( 10:19 ).
The U17 Men covered a distance of 6k and saw a winning performance by Fergus Scott in 19:36 with clubmate Joseph Vaughan 16 seconds adrift to take the silver and Ben Hope claiming 6th spot in 21:08 for another R&N team victory.
After winning the U11 Girls title last year Ella Darby moved up to take the U13 title in a time of 12:18 over 3k with Olivia Willison claiming bronze in 12:38. With Ruby Curtis-Free in 6th place on exactly 13 mins this ensured another gold medal winning team performance.
Jemima Cooper took this years U11 title (10:18) and she had back up from Katie Enefer (10:51) in 4th spot and Jessica Lamb in 6th (11:09) when they clinched gold over the 2k distance.
Amelia McMurtrie recorded 18:49 in the U17 Womens race over 5k. It was a performance that clinched a silver medal and led the R&N team home to another gold. Her club mates were bronze medal winner Lucy Stevens ( 19:12) and fourth placed Abigail Pearce ( 19:52 ).
The Senior Women just missed out on gold when Bethan Goddard covered the 6k route in 23:45 for 4th spot followed by 6th placed Poppy Carmichael ( 24:05 ) who took silver in the U20 race and Sophie Wilkinson-Hargate in 10th (25:56) for a well earned silver.
The U15 Girls won team bronze over 5k with Claudia Searle ( 4th in 18:42 ), Abigail Thayanithy (9th in 21:30) and Isobel Haynes ( 13th in 23:54 ). 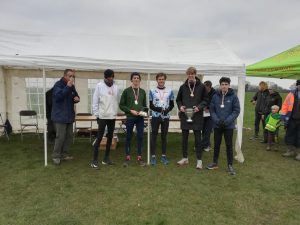