Rugby and Northampton AC has been taking part in Midlands Senior Championships for decades but Saturday saw their first ever senior victory.

The Midlands cross country relays took place at Wolverhampton with R and N fielding two senior men’s teams and one women’s team. Each consisted of 4 athletes (3 for the women) who all did a leg of the 6km circuit – which each runner completing 2 laps of the 3km route.

For the A team, Alistair McDonnel (19-29) led off and brought back the team in 6th position – and more importantly within striking distance of the leaders. Dominic Jones took over and ran the second leg, tearing through the field in 18-47, bringing back the team in second place. Dominic ran one of the quickest times all of all runners! Ben Musgrove (19-22) then took over the responsibility and very soon took the lead and held a small gap right until the very end. International orienteer, William Gardner, took over the final leg and surged away from the Tipton runner and opened up a 50m gap on the first lap and he further extended this lead to claim victory by over 200 metres in a time of 19-01. A truly outstanding performance!!

The B team consisting of Joe Musgrove, Cian Hutton, Myles Martin and Terry Egan finished 25th of the 48 teams who completed the event with Hutton clocking 22-02 for the fastest time. 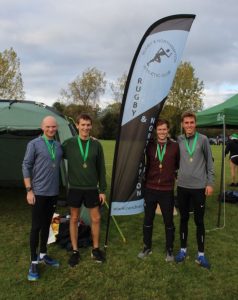